The Dark Side of the Universe DSU2022 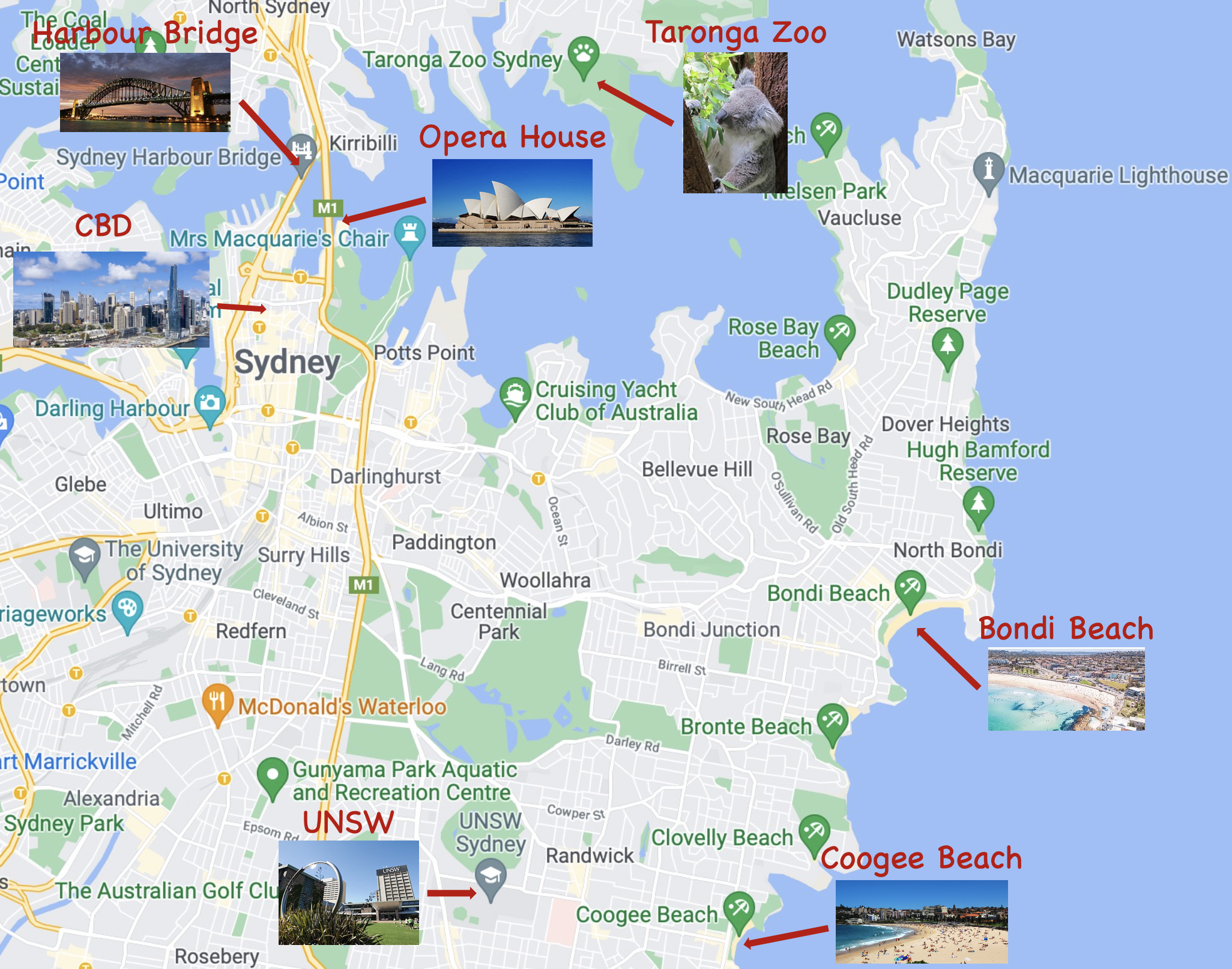 Sydney Harbour Bridge  This iconic landmark is visible from virtually every harbour-front location around Sydney (e.g., from the Opera House). There is a pedestrian walkway on the eastern side of the Bridge that can be accessed for free from The Rocks on the south side of the Harbour and Milsons Point on the north side. If you absolutely must climb to the top and don't mind shelling out $150 to $400 for the experience, BridgeClimb offers various climb packages (including equipment) to healthy individuals over the age of 10.

The Royal Botanic Garden  Plants are of course nice. But the main attraction here is arguably Fleet Steps, which offers that iconic photo opportunity of Sydney Harbour, the Opera House and the Harbour Bridge all in one single frame.

Manly  Reachable by ferry from Circular Quay (route F1), Manly is most notable for its beaches. A number of coastal walks begin/end in Manly, including the 10-km Manly-Spit Bridge Walk and the 9.5-km Manly to North Head Walk.

Taronga Zoo  No, there are no kangaroos and koalas living in people's backyards. Not in Sydney anyway. You have to go to the zoo to see them.  Accessible from Circular Quay by ferry (route F2).

Blue Mountains  A World Heritage Site about 2 hours by car west of Sydney, many coach companies offer day trips to the Blue Mountains, mostly departing from Circular Quay. Alternatively, you can catch the train from Central Station (Blue Mountains Line) to Katoomba, join a local tour there or explore the area on your own on foot. Sturdy footwear recommended.

Chinatown  Roughly defined by the area bounded by George, Quay, Harbour, and Liverpool Streets, Sydney's Chinatown has a large number of eateries serving various Chinese regional cuisines as well as other Asian cuisines. The international chain Din Tai Fung has a branch on George Street (and also at other locations around Sydney).

Koreatown High concentration of Korean BBQ places mainly around the intersection of Pitt and Liverpool Streets.

Thai town Can be found at the intersection of Pitt and Goulburn Streets.

Darling Harbour  Waterfront dining. Mainly modern Australian (whatever that means). Can be quite pricey: you do pay for the view.

The Rocks  This end of town is generally more upscale, and is home to a good number of Sydney's award-winning fine-dining restaurants.

Surry Hills  Formerly a Bohemian neighbourhood, now home to a large number of cafes, bars, and restaurants, mainly on and off Crown Street.

Tipping is entirely voluntary. By all means feel free to leave some money to show your appreciation of exceptional service rendered to you by the waiting staff. But with fixed wages and a national minimum wage set at $20.33 per hour, the highest in the world, the waiting staff does not strictly depend on tips to survive. At mid-range and more upscale restaurants it has become quite common to round up the bill to the nearest $5 or $10, or by up to about 10% (which is already considered rather generous). But no one will bat an eyelid if you insist on getting every last cent of your change back.

Most restaurants will not split bills. Cheaper (usually Asian) places often accept only cash payments, or may impose a surcharge if you pay with a card. All are good reasons to carry some cash on you.