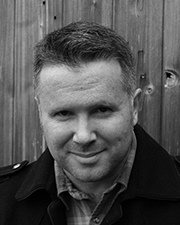 The designer of worldwide hit television show 'Bob the Builder', and international best-selling author of numerous children’s books, Curtis lives with his family in Cheshire, England.

Early work on ‘Wallace & Gromit’ and ‘Mars Attacks!’ led to him picking up his crayons in 1997 to design the BAFTA winning ‘Bob’. His own animated series, ‘Frankenstein’s Cat’ and ‘Raa Raa the Noisy Lion’, can both be seen on the BBC. His acclaimed picture books, ‘Old MacDonald Had a Zoo’ and ‘The Sheep Won’t Sleep’, are published by Egmont.

Although renowned for his work in film & TV, Curtis’ other love has always been horror and fantasy for middle grade and older audiences. His epic fantasy series, ‘Wereworld', was published by Penguin Random House around the globe, the first novel, Rise of the Wolf, being shortlisted for the Waterstone’s Book Prize. Described by Penguin as “Game of Thrones for teenagers featuring Werewolves”, it’s a tagline that has stuck to this day. His new ‘Max Helsing Monster Hunter’ novels, The Thirteenth Curse and The Beast of Bone Creek, are published by Viking in the US and Orchard in the UK.

Curtis visits schools around the world providing unique talks, workshops and learning experiences that cover three key areas of any curriculum — literacy, media and art. A champion of reading for pleasure, his work appeals to every audience, big and small.