Progress on Old and New Themes in cosmology (PONT) 2011 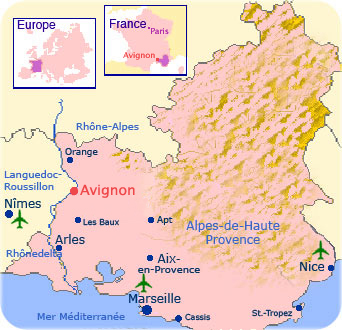 The Palace is situated on Place du Palais, just north of the Place de l'Horloge and close to the upper edge of the inner city. It is now a museum and a conference centre. Our Meeting took place in the Chambre du Trésorier.

From abroad, most likely you flew into the Charles-de-Gaulle airport, situated in the northern metropolitan area of Paris, and then took a high-speed TGV train down to Avignon. From Europe, you might also have found convenient flights into Marseille or Nimes.

BY TRAIN: Avignon has two train stations. The Avignon-TGV station (Quartier de Courtine, about 4km out of town) serves most direct TGV trains from Paris; it is connected to the city centre by a short bus ride (10min, every 15min). The Avignon-Centre station (Bvd Saint-Roch, just outside the city walls to the south) serves mainly local lines and some TGV trains.
Here is the french railway company website: SNCF.

From Paris: Most TGV trains leave from Paris-Gare-de-Lyon and get to Avignon-TGV in around 2.5 hours: this is the most frequent connection. Some TGV trains reach Avignon-Centre in 3.5 hours. In Paris, you can go from the Charles-de-Gaulle airport to Gare-de-Lyon in about 1 hour via the suburban subway lines RER B and then A (here is the website of Paris subway system). Note that the Charles-de-Gaulle airport has a TGV train station itself: there are some direct and connecting trains to Avignon-TGV and this could have been the most convenient option if it fit your schedule (about 3 hours, type Roissy or Aeroport CDG 2 TGV as departing station in the SNCF form).
From Geneva: About 3 hours to Avignon-TGV, more if connecting in Lyon.
From Lyon Part-Dieu station: About 1 hour to Avignon-TGV.
From Marseille St-Charles station: About 30min to Avignon-TGV.
From Nimes: About 20min to Avignon-TGV or 30min to Avignon-Centre.


BY AIR: Avignon has a small airport (Avignon Châteaublanc, AVN) with connections to Paris Orly and some connections to southern England. Switching from the Charles-de-Gaulle airport to the Orly airport in Paris takes about 1.5 hour by RER B.
More airlines (including low-cost ones) serve the Marseille-Marignane airport (MRS), about 70km from Avignon; you likely had to complete the trip to Avignon by train from downtown Marseille (St-Charles station).
The airport of Nimes (FNI) has a few low-cost connections; you could complete the trip to Avignon in about 1 hour by shuttle bus to Nimes station and then by train.
The Lyon Saint-Exupéry airport (LYS) is about 230km away; you needed to complete the trip by train.


BY CAR: Avignon is at the cross road of motorways A7 (Paris-Marseille) and A9 (Provence-Spain). Some driving distances are: 700km to Paris, 390km to Geneva, 230km to Lyon, 300km to Italy, 270km to Spain. If you have a car, you could use the underground parking lot at the Palais des Papes. The participation at the Meeting may entitle you to a 50% discount (i.e. 4.85 euro per day, ask at the reception).