The 2017 BOINC Workshop will take place at:

Talks will be held in the Salle des Séminaires located on the basement level of the institute.

IAP is located near the heart of Paris, a 10 minute walk from the latin quarter, and directly across from the Denfer-Rocherou RER-B commuter rail stop which makes accessing much of the rest of Paris quite convenient.

The entrance to IAP is off of Boulevard Arago via the gate pictured below: 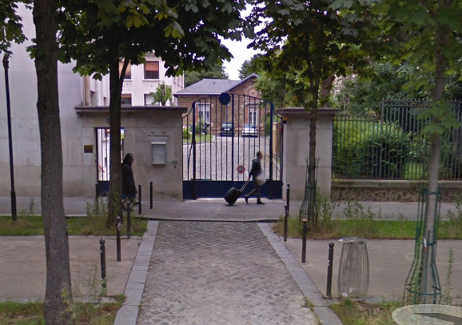 There is a button on the wall by the pederstrian gate you see in the picture, then simply walk into the courtyard and you will find the front door to IAP. The door requires a keycard, but if your arrive at the start of the day we will have it open, otherwise the receptionist or someone walking by will let you in.

The Salle des Séminaires has builtin outlets (European type only) for all seats. A guest wifi network will be available, as well as Eduroam for those with accounts.

Some background about IAP:

The IAP itself is a multi-disciplinary laboratory, working at the forefront of both astrophysics and theoretical physics. It is the main home of the Cosmology@Home team. The principal areas of research at the IAP are the formation of planetary systems and extra solar planetary research, stellar physics, galactic evolution, large-scale structure, observational cosmology, physics of the primordial Universe, and high energy physics.

The IAP also hosts a second-year Master’s program entitled "Astronomy, Astrophysics and Space Engineering", as well as the UPMC’s branch for the l'Ecole Doctorale d'Astronomie et d'Astrophysique d'Ile-de-France ("Doctoral School for Astronomy and Astrophysics", ED 127). It has an exclusive partnership with the Paris Observatory, which is located on the same campus. It also hosts the general secretary of the International Astronomical Union (UAI) since 1988. The IAP actively shares scientific knowledge, in particular by organizing public presentations on the first Thursday of every month.