Europe/Zurich timezone
The presentation will take place in form of a Zoom session. Registration is compulsory (deadline: 16 September at 5 pm). Details will be shared with registered participants.

The presentation will be introduced by Laure Esteveny (Head of CERN Alumni Relations) and Tullio Basaglia (Scientific Information Service). Paola Catapano (IR-ECO-APS) will moderate the debate.

This book, written by a multidisciplinary team of authors comprising scientists, artists and communicators, explores one of the most pressing issues of our time – the menace plastics pose to marine environments and organisms. It takes readers on a journey that begins on the beaches of Galicia, where the beach litter formed the starting point for an exhibition that combines art and science to alert the audience to the urgent need for action. The journey culminates with a short “plastic story”, which reveals a disturbing vision of the future significance of plastics for humans, and an example of how comics can deliver information to a younger audience. Along the way there is plenty of fascinating science, such as insights into the impacts of plastics and microplastics; the new marine ecosystem, known as the “plastisphere”; and the current status of the oceans, from the Arctic to the Mediterranean. The book also explores the historical developments; sustainable solutions, including the use of circular economy methodologies; and protective measures, like those being tried in China and the Far East. Lastly, it describes the role played by rivers as transport vectors for plastic, with special reference to the Danube, and to complete the picture, since most of the plastic is of terrestrial origin, it investigates problems related to microplastics in soils. 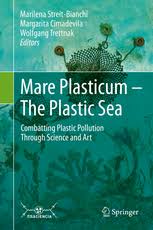 The book will be on sale at the Library Bookshop.