This page provides information about travel to Amsterdam and the city itself. See the Meeting Venue page for specifics about the workshop venue and how to get there.

Your airport of choice is Amsterdam Schiphol Airport (IATA: AMS). On arrival, follow the sign to the arrival hall, proceed through immigration (for non-Schengen arrivals, usually done in 1-5 min), and pick up your luggage (if any): once you exit the customs area you cannot get back in. Schiphol has a single-terminal concept: all piers and gates are interconnected by moving walkways. It does not matter which exit you take, all of them drop you in "Schiphol Plaza", the shopping centre and transport hub in the middle of the complex.

Taxis - Getting from the Airport to Amsterdam City Centre

If you prefer to take a taxi from the airport to the city, there is a taxi stand when you exit to the outside from Schiphol Plaza. The typical taxi fare is 40-50euros to the centre of Amsterdam.

If you prefer to use Uber, this will cost 20-30euros (non-surge pricing) for a trip to the centre of Amsterdam. The Uber drivers often prefer to pick people from the drop-off part of departure area rather than the arrival area. To get there, you will need to find one of the stairwells/elevators to go up one level from Schiphol Place to "Departures" (Vertek).

If you prefer to use public transportation there are trains from the airport to the central station (and trams from there to rest of the city), as well as buses such as the Amsterdam Airport Express (#197) which goes to the centrally located Leidseplein (with stops around the Museumplein). General information can be found on the iamsterdam travel website.

The important thing you need to know about public transport in Amsterdam is that the system is based on having an "OV-chipkaart", which you will use to "check-in" and "check-out" of trains, trams and buses. To check-in you hold the card in front of a scanner until it beeps and says "goede reis"; to check-out you do the same. The scanner which you should use to check-in and check-out is located inside trams and buses, but is located outside the train in the stations. See this video to see how this works.

Amsterdam locals typically use a rechargeable card, and it may be possible to buy one-off tickets on the bus/tram itself, but for tourists there are other, better fix-price/multi-day options which you can get at Schiphol airport. You can get these cards at the NS Ticket Service area or, for example, at the "AKO Nieuws & Media" store in Schiphol Plaza: 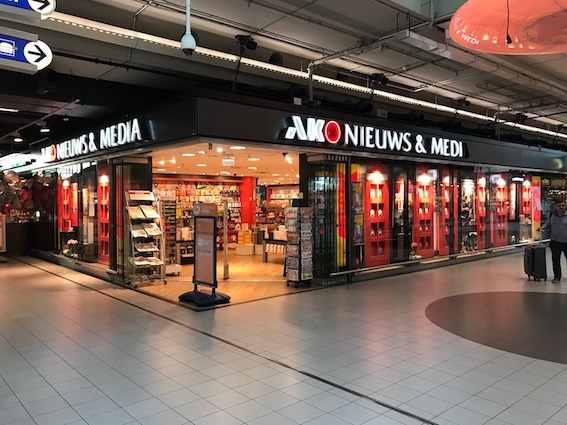 They have two types of "fixed price" tickets:

Please confirm with the person selling the tickets that you are buying the right type of card for what you want to do. (And remember to both check-in and check-out of the various transportation vehicles.)

If you just want to get to a restaurant and don’t care about the sort of food you get, head for the Reguliersdwarsstraat, the narrow street that runs between the Koningsplein and the Rembrandtplein parallel to the flower market. Here you’ll find Indonesian, Argentinean steak, Mexican, Indian, and garlic-inspired food in plenty. Also, most of the restaurants here are actually quite reasonable, as most of the tourists tend to get trapped elsewhere.

Many pubs can also be found through the rest of the city. Try a few in the Jordaan, just west of the city centre around the Westermarkt and beyond. And in “de Pijp”, around the Ferdinand Bol straat and the Heinekenplein.

By far the best beer can be found at Amsterdam's local breweries Brouwerij 't IJ - a large variety of great beers and ales, slightly outside of the centre but impossible to miss next to an in-city windmill. The sampling room and cafe is open till 20.00 daily (so get there early). Or head to De Prael, 2 min from the venue at the Oudezijds Voorburgwal and a tasting room (Oudezijds Armsteeg 26) open until 24.00 Tuesday - Saturday (Sundays: till 23.00, closed on Monday). If you would like to sample from the wide variety of Dutch beers, try Proeflokaal Arendsnest (Herengracht 90), a small bar with charming interior and a nice neighbourhood feel.

There are just a few places to avoid:

There are plenty of sandwich shops (“broodjes zaak”) in Amsterdam, but supermarkets nowadays also have a good selection of sandwiches and meals “to-go”. Albert Heijn is the largest of them, with a big supermarket just behind the Palace on Dam Square. There are “AH-to-go” shops in many of the larger train stations, such as Centraal Station and Amstel.

Near the Spui in the city centre, “Broodje van Kootje” has a large selection of fresh sandwiches, laden with old Dutch cheese (the real stuff, not the plastic-tasting fake-Gouda you see in the rest of the world), cured ham and fish. Eat your sandwich on a bench in the Begijnhof (see below) if the weather allows it. Another option is one of the all-day markets in Amsterdam. There are two worth mentioning: the Albert Kuyp market (in the “De Pijp” neighbourhood, just south of the inner ring road), and the Dappermarkt in the East. The Albert Kuyp has, incidentally, also the highest density of heron birds, waiting for the end of market to get their bellyful of fish, French fries and mayonnaise.

Very popular and central: De Jaren overlooking the Amstel river, or you could try De Kroon (upstairs on Rembrandtplein, extremely crowded on weekends if I remember correctly).

But there are plenty of cafes and bars on the canals as well (try the west side first, around Singel the Westermarkt). Also there are plenty of places to get good coffee, and you should not have trouble finding a decent espresso in any cafe, restaurant, or in dedicated coffee places (Coffee Company, D-E-Cafe). And even one of the two Seattle, WA, US based chains can be found if you're so inclined.

Although much more satisfying than, for example, the Breton “crepes”, having just a single pancake for dinner will leave you wanting for a sizeable dessert. But then, most places will have ice cream or fruit sorbet to complete your meal. Pancakes are also a good alternative if you long for a quick bite in the afternoon. Actually, many of the pancake restaurants in the Netherlands in summer get most of their customers from touring cyclists and families longing for a filling at lunchtime or as an alternative for a tea-time snack.

It is sometimes said that this is as close to the traditional Dutch dish as you’re likely to come. Indonesian and Chinese-Indonesian (“Chinees-Indisch” in Dutch) restaurants are amongst the most frequent in the Netherlands, both for eat-in and take-away. Only in the last 10 years did the take-away Chinese have to give way to pizza couriers that deliver your dinner at your door step. In the 1950, the large influx of people from the Dutch-Indies changed the Dutch dinner landscape forever. With then-exotic tastes and large quantities, the “chinees-indisch” restaurants took over.

If you are still looking around, most of the Indonesian restaurants you’ll see are quite fine, except for those in the known tourist trap areas (i.e., those around the Leidseplein and immediately around the Rembrandtplein).

There are plenty of mediocre steak houses around, largely in the tourist areas. Avoid these, and head for a steak house a bit further from the main roads. The reguliersdwarsstraat again is a good bet. Roses Cantina (Reguliersdwarsstraat 38-40, 020-6259797) – good authentic Mexican food. You may have to wait a while to be seated, or be served for that matter, but the quality of the food is great.

Amsterdam’s China Town is around the Nieuwmarks and the Zeedijk. There is a whole bunch of traditional (i.e. non-indonesian) chinese restaurant here, with Nam Kee being the most famous. And the Dutch movie “The Oisters of Nam Kee” based on the book of Kees van Beijnum will not have lessened their popularity one bit. As far as I remember, it was a good restaurant which was frequented by ethnic Chinese and locals alike, so it’s worth giving it a try. And if you don’t like the ambiance, pick any of the other restaurants around it.

At some point you'll unfortunately have to leave, likely through Schiphol Airport again.Make your way to Central Station and buy a ticket (again €3.90). Trains stopping at Schiphol Airport are clearly indicated, usually leaving from platforms 14a and 15 (Fyra: no supplement needed for Schiphol) every 5-10 minutes (trip takes 17 min).

Most airlines do electronic check-in, and mobile boarding passes. Contact the registration desk or your hotel reception in case you need a tree-derived (paper) boarding pass printed. Travelling with hand-luggage only, for flight inside the Schengen area allow 60 min for the security check and getting to your gate (it may be a long walk). For non-Schengen destinations, allow 60-90  for passport control and security (at the gate).

Once at Schiphol, if you are travelling to the Schengen area (gates A, B, C, D59-87 and M), there is of course no immigration check, but a baggage security check is done immediately, as you enter the passenger-only area (full of shops). If you are travelling outside the Schengen area (gates D1-58, E, F, G and H), you pass through immigration only and are dumped into the shopping area. Security checks are done at each gate individually (so as long as there are other people queuing for your plane, you don’t need to ...) The entry to the Schengen area is at "Departures 1", most major airlines from Europe leave from "Departures 2", whereas most budget carriers and many US carriers (but not Delta), use "Departures 3". See the map to find out where to go.

Airline lounges are all on the upper level (‘Level 2’), with KLM and SkyTeam having one lounge in the Schengen area and two lounges in the non-EU area (one near the E gates, one nearer to the F gates). Level 2 between the E and F gates is also the place to go to if you want a relaxing chair in a quiet spot. Just opposite the airline lounges are some very nice publicly-accessible chairs.

If you are culture-starved, you can explore paintings in an annex of the Rijksmuseum for free, on Holland Boulevard between gates E and F, after carefully negotiating your path through the inevitable shopping circus that surrounds it.

Given that the Thursday after the workshop is a holiday, some of you might stick around to explore the city. Amsterdam is full of entertainment, museums, historic spots, and situated in uniquely Dutch and rather watery surroundings:

Want to know more about Amsterdam and its opportunities?

Plenty of time left? You can consider going to Haarlem (20min by train), and visit the historic centre and our oldest museum (Teylers) with a working static electricity generator and set of Leyden Jar capacitors (although seldom demonstrated still worth looking at even when idle). The same museum also features plenty of other historic physical instruments as well as an extensive collection of natural history objects, drawings and paintings. Or pick your trips to Monnikendam or Marken.

This page was adapted and updated from an earlier A'dam travel guide written by David Groep (Nikhef) for CHEP 2013.