Thierry graduated from RUCA in applied economic science in Antwerp and obtained a master degree in financial management at VLEKHO in Brussels. In 1985 he joined CERN, the European Organization for Nuclear Research based in Geneva, Switzerland. He was first a Contract Officer (1985-1992), then became Head of Purchasing Service (1993-2001), and Leader of Supplies, Procurement & Logistics Division (2002-2003). Afterwards Mr Lagrange fulfilled the function of Finance Deputy Department Head until 2008, and then became Head of Finance Department. He was responsible for the financial operations of CERN, such as accounting, payroll and treasury, procurement of goods and services, knowledge transfer activities and sales. In 2015 Mr Lagrange also acted as Chief Executive Office ad interim of CERN Pension Fund. The Fund manages approximately 4 billion Swiss Francs in assets, both internally and externally. Since 2016 Mr Lagrange has been Head of Industry, Procurement and Knowledge Transfer Department at CERN, whose mission is to provide essential support and advice on procurement, knowledge transfer and EU projects. 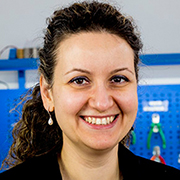 Bilge is an astro-particle physicist professor at the Ankara-based Middle East Technical University. She studied at MIT and Oxford, worked at Cambridge and CERN for 15 years on silicon detectors and data analysis for the ATLAS Experiment as well as the space radiation with the AMS Experiment. Bilge received multiple awards including the L'Oréal-UNESCO For Women in Science International Rising Talent fellowship and co-funded THE Port humanitarian hackathons at CERN.

Passionate about social entrepreneurship and leveraging the potential of Geneva-based international sectors for social innovation, Felix a co-founder of Impact Hub Geneva and Lausanne. He leads operations and public relations. Alongside the Hub, Felix is co-president of the Geneva Global Goals Innovation Day (G3iD) and supports Just Innovate, as well as the THE Port Humanitarian Hackathons as an advisory board member. Kitesurfing and cross-country skiing are among the hobbies he loves most.

Prior to this, Manuela was an experimental researcher in particle physics. In 2001 she joined the ATLAS collaboration, and worked on the construction and commissioning of the precision muon chambers. Manuela holds a PhD in Particle Physics from the “Scuola Normale Superiore” in Pisa, Italy, as well as a Master in Science Communication and Journalism from the University of Ferrara, Italy. In parallel to her scientific carrer Manuela has gathered more than 12 years of experience in science communication and popularisation, for a variety of audiences and stakeholders of all ages. She is also a teacher and coach in science communication, science writing, and public speaking.

Dr. Sanae Mazouri is laureate of the Faculty of Medicine in Nancy, France. She holds a doctorate in general medicine in France and an FMH specialty title in internal and general medicine in Switzerland.  She has worked in the largest hospitals in French-speaking Switzerland, first at the CHUV in Lausanne, then as senior physician at the University Hospitals of Geneva.

She has awarded thesis and publication about the quality of the primary care physicians training in Switzerland and France.

She currently works at the HUG Innovation Center on several telemedicine projects.

I am a seasoned executive within the life-sciences field, with 20 years multidisciplinary management experience in highly technical environments. My core expertise lies in operations that require deep understanding of the critical business drivers across markets and industries. I have a solid understanding of science and technology, with a proven track-record in business development, in- and out-licensing and distribution, IP, regulatory affairs, as well as supply chain and quality assurance.

I have lived and worked throughout Europe and Asia, with further international business experience in the US.

I am not an armchair quarterback; I am fully prepared to roll my sleeves up. I have been in the trenches - and I am still, every day.
Specialties: Product development, market introduction, distributor negotiation, regulatory affairs, quality assurance, new company development, fund raising, business development, general management