Crete is the largest of the Greek islands (8,450 km2) and the fifth largest in the Mediterranean sea (after Sicily, Sardinia, Cyprus and Corsica). It is elongated in shape and has an East – West orientation with a length of 260 km (162 miles) and a width of 60 km (37 miles).

The island is famous for its natural beauty, thousands of years of history, unique culture and cuisine, and is one of the top tourist destinations in Greece attracting over 2,500,000 visitors per year.

Cretan history and archaeological ruins date back to the Neolithic period with settlements as early as 7000 BC. During the Minoan era (approx. 3000–1000 BC), Crete was considered to be the center of the Mediterranean civilization.

Left: The ancient Minoan Knossos Palace near Heraklion the capital of Crete, Right: the amazingly smelling Lily of Knossos or sand lily (sea daffodil) appearing in the famous Knossos murals.

In Greek mythology, Crete has a very strong presence. A very popular myth is the one of the prince of Athens Theseus’ victory over Minotaur,  the mythical monster.  Minotaur  lived  in the Labyrinth believed to be built near the Knossos Palace  of King Minos, the infamous ruler of the Minoan empire. (The ancient city of Knossos was the seat of the Minoan civilization and is now considered the oldest city in Europe!)
Another famous myth is that of Daedalous (the architect that built the Labyrinth) and his son Ikarus who are the first people to ever fly using wings made of feathers and wax (and so the myth goes...).

Crete is the most populous island in Greece with a population of 633,000 in 2017. Its largest cities are Heraklion (Herakleion, Iraklion) which is the capital of the island, Chania (Hania), and Rethymnon.

A view of the Chania harbor at dusk.

Chania (Hania) is known for its beautiful 14th century Venetian harbor and the unique old city surrounding the harbor. It has picturesque buildings, narrow streets, museums, restaurants, cafes and specialty shops. The city and the harbor are considered a historical monument and are the most popular and lively destination in Crete!

Kolympari (Kolymvari, Kolymbari) is a serene coastal village about 23 km away from Chania on the West side of the Chania Bay. It is surrounded by thousands of olive trees, orchards, and many crystal clear pebble beaches.

Some of the finest olive oil of Crete is produced in the Kolympari area. Within a short driving distance from Kolympari is the village of Vouves famous for its 4000 years old olive tree still producing olives.  Branches from this tree were used to make wreaths for the Marathon winners of the 2004 Athens and 2008 Beijing Olympics.

Crete is well-­known for its coastline with over 300 beaches. A few of the famous ones are:
Elafonissi, Balos Lagoon, Falassarna, Gramvousa, Preveli, Vai, and Matala. The first four beaches are within a reasonable distance from Kolympari. 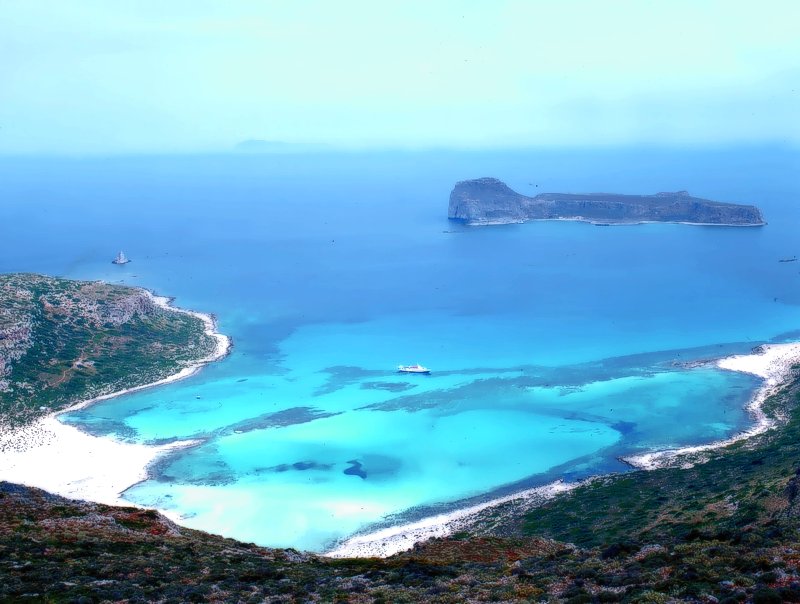 The Balos Lagoon, one of the popular beaches of the region.

Last but certainly not least:

In addition to olives and olive oil, among the famous products of Crete are wine and grapes, a large variety of vegetables and fruits, honey, herbs (such as Mountain tea malotira), dairy products (including unique and delicious cheeses) and many more.

The Cretan traditional cuisine or  Cretan Diet which first attracted the attention of the scientific community in 1948, is considered to be the finest example of the Mediterranean diet which was inscribed in 2013 by the United Nations Educational Scientific and Cultural Organization (UNESCO) as Intangible Cultural Heritage of Humanity.