How to get to Bilbao: Airport

A 20-minute journey through the Artxanda tunnels or along the BI-631 road separate the airport from the centre of Bilbao. The traveller has several options of ways of making the journey:

Please KEEP IN MIND that there is NO MONEY EXCHANGE OFFICE in the Bilbao Airport, so you will have to bring the currency previously in Euros, or if not, take it out at the ATMs available in the terminal. 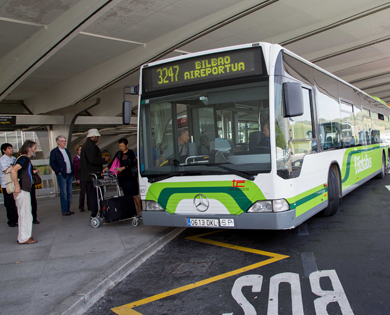 A3247 BILBAO-Airport: operates every day of the year, with services every 20 minutes in Summer, and 30 minutes in Winter, connecting with TERMIBUS, the Bilbao bus and coach terminus. Before reaching the end of the route, this bus makes three stops in the city centre,14 Alameda Rekalde, Plaza Moyúa  and at 74 Gran Vía.

To get the BUS ticket, there is an office inside the airport, right next to the bus stop. You have to ask for the ticket in this office, and afterwards, show it to the bus driver. In principle, it is not allowed to pay with money in this Bus-line, except in the case that the ticket purchase in the office supposes to lose the bus. If you have very little time, go directly to the bus.

In Bilbao Airport the taxis of the Federación Margen Derecha del Taxi operate, with 57 taxis in the Arrivals area every day. You can book a taxi by telephone or using the form on their website.

How to Move around Bilbao

There are three main means of transport to move around Bilbao. 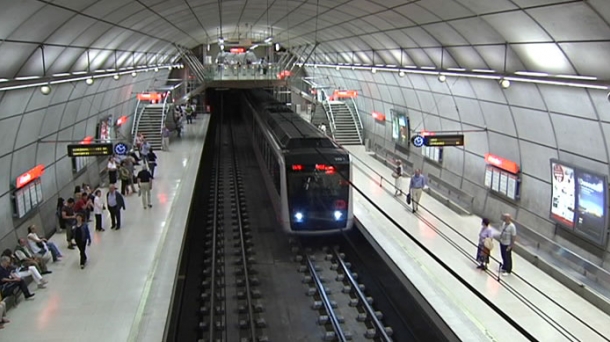 The Metro Bilbao was officially opened in 1995 and was designed by Sir Norman Foster (Manchester, 1935), one of the most innovative and important architects of our times. His individual style has given the city one of the most recognisable architectonic landmarks: the ‘fosteritos', which are the entrances to the various stations and are always made of glass and steel. Likewise, the inside of the metro was designed to ensure the stations were as close as possible to the surface, offering open spaces with great visibility provided by natural light. 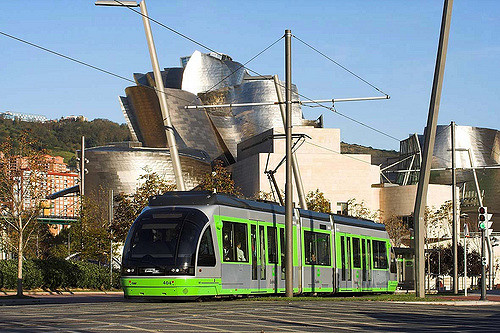 The first tramway, the Bilbao - Las Arenas line, appeared in Vizcaya in 1872, but shortly afterwards, in 1876, it was followed by the left-bank stretch, the Bilbao - Santurtzi line. It is this line that became the first Spanish electrical stretch that we can see today: the cleanest, most silent, environment-friendly and efficient means of transport.

After a continuous development concomitant with the effects of the industrial revolution, by 1920 Bilbao's tramway network stretched over 109 km, with Arenal as the key centre of the 12 existing lines. Subsequent crises, however, led to the disappearance of the tram in 1964, replaced by the more modern trolleybus, or electric bus.

In late 2002, almost four decades after the last tram went along Bilbao's streets and after three years of remodelling works, the legendary bell began to ring again, bringing the village back into the era of modern, sustainable and environment-friendly public transportation.

The line has been gradually extended to cover an area linking Atxuri to Basurto, with a central stretch across Abandoibarra district -the new leisure area in the village- and stops in some of Bilbao's architectural landmarks, such as the Arriaga Theatre, the Guggenheim Museum, the Euskalduna Palace or the San Mamés Football Stadium.