Szczecin is located near the border between Poland and Germany and the distance to Berlin is only about 130 km. Although there is a small international airport at Goleniów (36 km away from Szczecin), for most departure cities it is recommended to fly to one of the Berlin airports (Tegel or Schönefeld), from which Szczecin is easily reachable by bus in about 2 hours.

There are shuttle buses operated by Interglobus (“Follow me!”) departing from Goleniów airport 20 minutes after the arrival of each Ryanair or Norwegian flight and arriving at the city center of Szczecin (Polish Airlines “LOT” Office at al. Wyzwolenia 17) about one hour later.

It is strongly recommended to book the tickets in advance on the Interglobus website for 15,50 PLN, but you could also buy tickets for 19,50 PLN from the driver if there are still free seats.

For the LOT flights from Warsaw, there are shuttle buses operated by LOT itself departing 15 minutes after each arrival. Tickets can be bought from the driver for 25 PLN, but reservations should be done before by phone:
+48 504 188 737

The airport is pretty small, so that you cannot really miss the shuttle buses.

2. From the Berlin airports (SXF or TXL) by shuttle bus:

From Schönefeld airport (SXF), there are shuttle buses operated by Interglobus (branded “Follow me!”) and by PKS Szczecin.

The buses of Interglobus run at least once every hour from 08:15 to 00:45 (timetable) and they reach the Szczecin Główny railway station about 2 hours later.

It is strongly recommended to book the tickets in advance on the Interglobus website in order to secure a seat. If your flight is delayed you can use a later bus at no additional cost, provided you have a regular ticket for 49 to 79 PLN and not a much cheaper promotion ticket. You could also buy a ticket from the driver if there are still free seats.

The Interglobus buses start from the bus station in front of Terminal B. You probably won’t be the only person on your airplane going to Szczecin, so just ask one of the passengers speaking Polish for help in case of need.

The buses of PKS Szczecin run less frequently (about once every 2 hours from 8:30 to 23:25), but can be cheaper if booked in advance. The timetable is available only in Polish, but tickets can be booked here in English.

The PKS buses also start from the bus station in front of Terminal B.

From Tegel airport (TXL), there are shuttle buses operated by Flixbus (in cooperation with Interglobus) and by PKS Szczecin.

The buses of Flixbus run about once every 2 hours from 07:35 to 23:35 (timetable) and they reach the Szczecin Główny railway station about 2 hours later. It is strongly recommended to book the tickets in advance on the Flixbus website for about 11 €/45 PLN in order to secure a seat. (You could also buy a ticket from the driver for 19,50 € if there are still free seats.)

The Flixbus buses (bright green coloring) start from one of the bus stations in front of Terminal A/B.

The buses of PKS Szczecin also run about once every 2 hours from 9:10 to 22:30, but take about 3 hours instead of 2 to arrive in Szczecin, because from Tegel airport they first go to Schönefeld airport to pick up passengers and only then towards Szczecin. The timetable is available only in Polish, but tickets can be booked here in English.

The PKS buses start from one of the bus stations in front of Terminal B.

(Given the less frequent bus connections compared to Schönefeld, it might be worth to check the public transport connections to Szczecin. You can reach the Berlin main railway station [Hauptbahnhof] easily by taking the bus TXL from the respective bus stop outside Terminal A/B. Please continue reading below “5. From Berlin by train”.)

c) From the Szczecin Główny railway station to your hotel:

All shuttle buses from the Berlin airports stop at the Szczecin Główny railway station, also called “Szczecin PKP”. From the station you may pick up a taxi. The cost should not exceed 15 PLN. We strongly recommend to choose a taxi from a reliable company like e.g. Taxi4You (if you do not find one of their taxis, you can order one by calling +48 914 833 833), City Taxi, Radio Taxi or Mix Taxi. Taxi drivers at the railway station not affiliated to such a company have the reputation to try to overcharge non-locals and especially foreigners. Another option would be to just walk to your hotel, since some of the hotels we recommend are in the neighborhood of the main railway station, especially Ibis, Novotel and Campanile.

If you want to use public transport to get to your hotel, please take a look here.

3. From inside Poland by train:

There are direct train connections with ExpressInterCity (EIC), InterCity (IC) or TLK trains from most major cities in Poland to Szczecin. You can buy tickets to print at home for all direct connections as soon as 30 days before the departure on the PKP Intercity website: intercity.pl

4. From inside Germany by train:

Given that Szczecin is located less than 15 km away from the Polish-German border, from a lot of places in Germany it is worth checking the possibility to take a train to Szczecin. Unfortunately, there are currently no special international offers by the Deutsche Bahn like “Sparpreis Europa” when crossing the border close to Szczecin. Therefore, we recommend that you book a ticket to the last station in Germany, which is “Tantow”. By doing so, you can take advantage of all the special offers, i.e. “Sparpreise”, for inner-German travel.

You can check out the train connections on bahn.de and book a print-at-home online ticket as soon as 90 days before departure. The earlier you book, the less expensive the ticket will be.

5. From Berlin by train or bus:

If you want to, say, spend the weekend before the conference in the exciting city of Berlin, you can also easily go to Szczecin by regional train using the VBB Berlin-Stettin-Ticket for only 10 € (or 7,50 € if you own a BahnCard). This ticket is actually valid from any train/metro/tram/bus station within the Berlin AB fare zone and also valid for one journey in the trams and buses in Szczecin after your arrival there.

A map of the Berlin public transport network and the fare zones, can be downloaded here as a PDF. 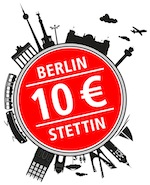 Train connections from Berlin Hbf or Gesundbrunnen via Tantow to Szczecin Główny are available more or less every two hours until 20:29. For most connections, you have to change trains in Angermünde, which usually works well, because the RB66 train to Szczecin generally waits if the previous RE3 train is delayed. But there are also three direct connections per day from Berlin-Gesundbrunnen at 08:05, 14:27 and 17:21.

You can check out the connections on bahn.de, but be aware that the prices shown there (34,50 € and more) are exaggerated international SCIC tariff prices. The Berlin-Stettin-Ticket for 10 € (7,50 € with a BahnCard) is an offer by the VBB transport association. You can buy it on all S-Bahn and Deutsche Bahn ticket machines in Berlin. However, please note that on the Deutsche Bahn ticket machines, you have to explicitly choose the option “Transport association tariff”/“Verbundtarif” at some point in order to obtain the 10 € ticket.

Apart from that, Flixbus offers bus connections from the central bus station (ZOB) in Berlin to Szczecin starting at 7 €. It is the same bus that also stops at Tegel airport.