On Sunday 28th of August, at the New Town Hall of Thessaloniki, an evening programme of activities, addressed to the public of all ages, will bring in contact everybody with the most advanced cutting-edge research related to the understanding of nature and the laws that govern our universe. The event is organized by the 12th International Conference “Quark Confinement and the Hadron Spectrum” which takes place in Thessaloniki from 28th August to 3rd September (http://indico.cern.ch/event/353906/).

In the first part of the event, in the early evening (18:00-19:00), the visitors will have the opportunity to perform simple physics experiments and analyze real data from the Large Hadron Collider (LHC) at CERN, under the guidance of Greek and foreign researchers.

Four years ago at the LHC, the Higgs boson was discovered after fifty years of research. Last summer the LHC - after two years of intensive upgrade - started recording physics data from proton collisions in nearly twice the energy it had before. The upgraded LHC will perform precision studies of the Higgs boson and look for new particles possibly produced in these unexplored energies.

The public will have the opportunity to "discover" the Higgs boson using the HYPATIA software (created by the University of Athens), exploit the way the ALICE experiment searches for the gluon-quark plasma, which was present at the earliest moments of the Big Bang, and ask questions and get answers by distinguished scientists.

Later on, a theatrical group of high school students of the Innovative School of the University of Thessaloniki will perform a play entitled “time is and rolls”, followed by a musical performance by the soprano K.Petrou accompanied by pianist T.Dorigo.

In the second part of the event (from 19:45 onwards) Prof. Emanuel Tsesmelis from CERN and University of Oxford will deliver a public lecture entitled  “ CERN and search for new physics” and will answer questions plus discuss with the audience.

Program of the event

18:00  Introduction to CERN by its researchers, exhibition

by Prof. Prof. Emanuel Tsesmelis, CERN and Univ. of Oxford

20:30 Second part of the musical concert

20:45  Questions and discussion with the public 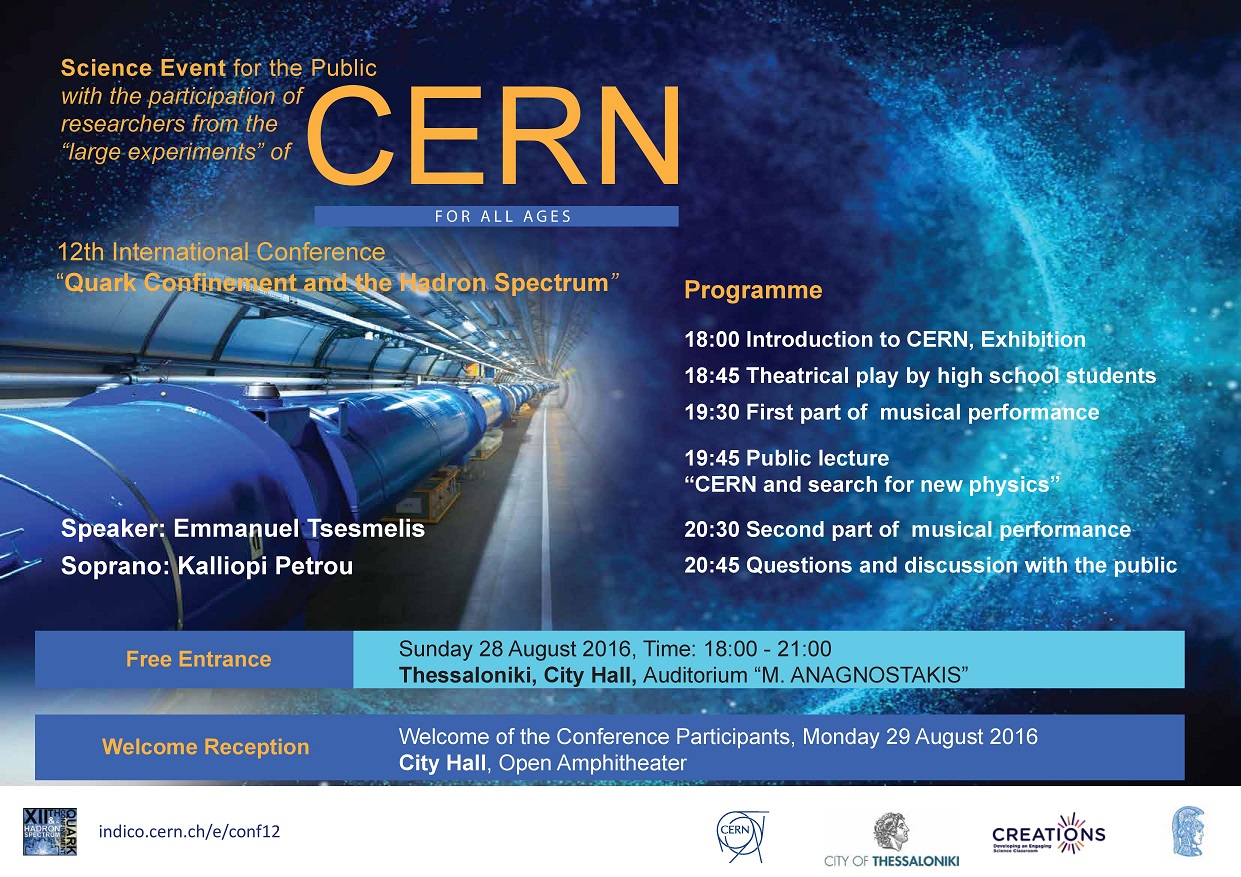